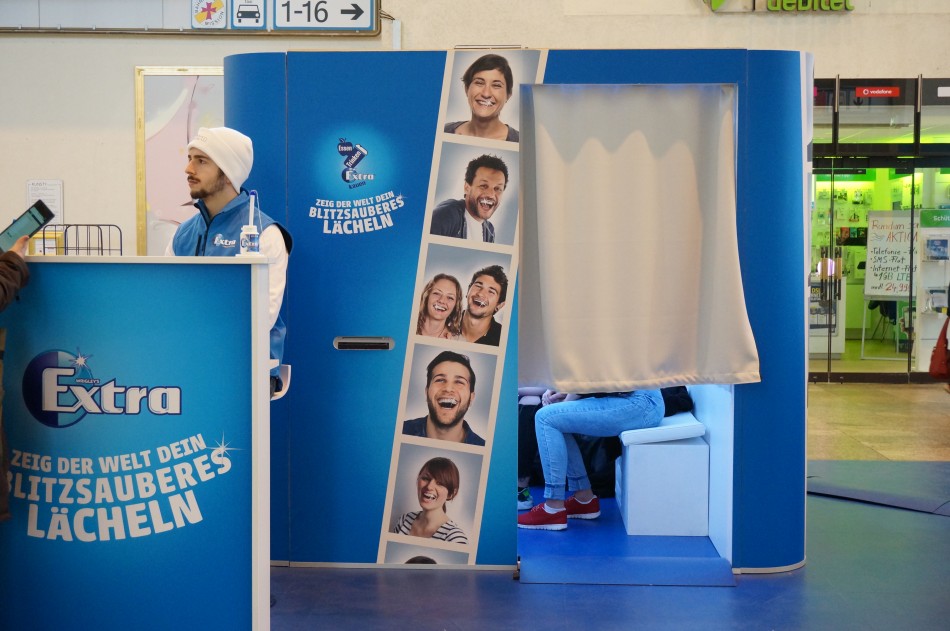 We put our love for innovation to use and created a photo booth that triggers cameras when you grin. Before printing these out, it added a sparkle above each smile.

The photo print included a unique URL on it so that users could view the bullet-time GIF animation online. Those who didn’t smile received a pack of Wrigley’s gum instead, dispensed by the machine. Photos taken in the booth were immediately uploaded online as GIFs, so photo booth users could share them on social media within seconds.

It was a technologically challenging but highly rewarding project that created a really enjoyable experience for users. We hid nine Canon 100D cameras behind a one-way mirror to create the so-called “bullet-time animation” that gave the compiled images a GIF-like quality. Speakers embedded into the booth gave users voice prompts about what to do.

The cameras were triggered by a custom-made Arduino micro-controller and printed circuit board. We created smile detection software using facial expression algorithms and Microsoft Kinect technology. Users who smiled triggered simultaneous photo capture from all of the cameras, and the brightest spot in their smile was detected by the cameras and the “ding” was added on top.

Users could use the touchscreen interface to choose their favourite images, which were post-processed automatically after that. They could pick from a number of headlines to explain why they were smiling, such as “I’m sexy and I know it,” “My train was on time today,” or “New Extra tastes great.” They could also preview the GIF and view a printed photo strip with the URL to the Wrigley’s microsite on it.

Brand ambassadors manning the photo booth could moderate photos being taken and, if there was no explicit content, would upload them onto the LED billboard by the booth. The photo booth traveled around three major cities in Germany, with brief stints in Berlin, Stuttgart and Frankfurt’s central train stations.