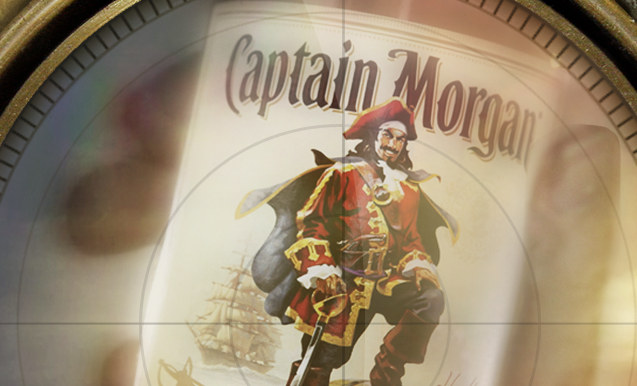 This is Diageo’s biggest app to date, and its not an Advergame. A Unity3D Real-World Strategy Game fully integrated into Foursquare, Facebook and Twitter!

The key for us was to create an experience that augments the user’s daily life, while subtly including the brand into various parts of the architecture of the game. If a user likes to check in with Foursquare, we should allow them to do this, but through Captain’s Conquest, and we should reward them for it. We attempt to recreate an older world by creating a sense of adventure with augmented reality, tattered, tea stained maps and good old fashioned sea battles.

As the user explores the real world, more of the map will be revealed. The Google Maps API or purpose built OSM API is used to get the user’s real world location information. The map displays other players around the user and shows which fleet those players belong to and what Rank they have acquired. The map serves as the main entry point for starting a battle. Users will be rewarded for traveling outside of their usual locations.

If you win the battle, you’d get rewards. These rewards come as proportionate amount of XP & Golds. The Amount of the Golds you get does not exceed the amount of Golds the opponents had when starting the battle. Rewards as message attachment.

When user starts the game he is automatically assigned to “junior” fleet which has No Flag Colour. The reason why we having this, just to avoid forcing users to do too many things before playing the game. The user will stay in this Junior Fleet for level 1.

Once the user reached level 2, he would get the message from the Captain Morgan to prompt to choose a Fleet. No cost needed to join the normal Fleet, however there is “Fleet Bonus” when joining less popular Fleets to balance the territory.

The user can access their Inventory to ‘use’ different tools, weapons, upgrades, etc that they have bought from nearby Docks, looted from other Ships and just come across while sailing the seas.

Fire Power, Armour and Navigation can be upgraded by using a wide collection of different items. The user’s ship armour is repaired when they user checks into a Port.

Bar hopping and visiting venues with the mobile in hand turns the player’s everyday life into something more like the Captain exploring the ocean.

By using Foursquare, users can find Docks – which are real world business locations – around their position on the map. Besides finding opponents to battle against, users can dock (check-in) into Port and purchase Game items from the Shop’s inventory. The selection of purchasable items is depending on the nature of the real-world Shop, e.g. at a Bar, the user will be able to purchase Health related items to repair their Ship.

We employed foursquare within our game so users can say where they are and we’ve mapped that to the docking action in the game itself so theres this contrast between the fictional representation in the game and the physical actions that people perform anyway on a everyday basis.

The price of an item at a particular location is defined by the item’s price range in the database, weighted based on location. Things that drive the price to the lower value (cheaper); Your Fleet has the most people at that location, There are lots of that item available at this location, There are many people checked in here, There are currently lots of this item in the game world

Selling is the inverse of Buying and thus what drives the buying price up, drives the selling price down. It is slightly different from buying as selling also depends on any accumulation bonuses you may have for that Item. When an item is sold, the seller is given some Gold and the Item no longer appears in the seller’s inventory, and is removed from the game world. It does not appear at the dock at which the user sold it.

Scope, allows you to point your camera towards a captain morgan product of some sort and unlock rewards to be sold or traded in the Game!

You can be in a pub with your friends and you see a Captain Morgans bottle behind the bar and you can point your camera at it and it will give you an in-game reward. so its a nice way of the actual product.. the actual physical product popping up in the game world and it doesn’t interfere with the actual game experience, its a fluid introduction of the product into the game…

This is one of the things that we’ve built the whole game around. its all about this, combining real world activities and real world acurancies with the game world and making those things relivant within the context of the game.

The captain might send you messages about someone attacking you, this is a good way to stay in contact with the user, but also if your not getting a message being told that your being attacked then theres no way for you to respond. Users receive messages about random items they have picked up floating in the oceans and other messages to maintain interaction…

The messages are there to keep you involved and make sure your up to speed with things going on around you.

The Facebook page provides an insight overview to the experience, it summarises the activity of what is happening in the game on a minute to minute basis. Players and non-players of the game who just want to spectate can easily get an overview of the current state of the game.

On the Facebook page players can also access the Leaderboard, which can be filtered by the two Fleets, the user’s Facebook friends and the Hall of Fame.