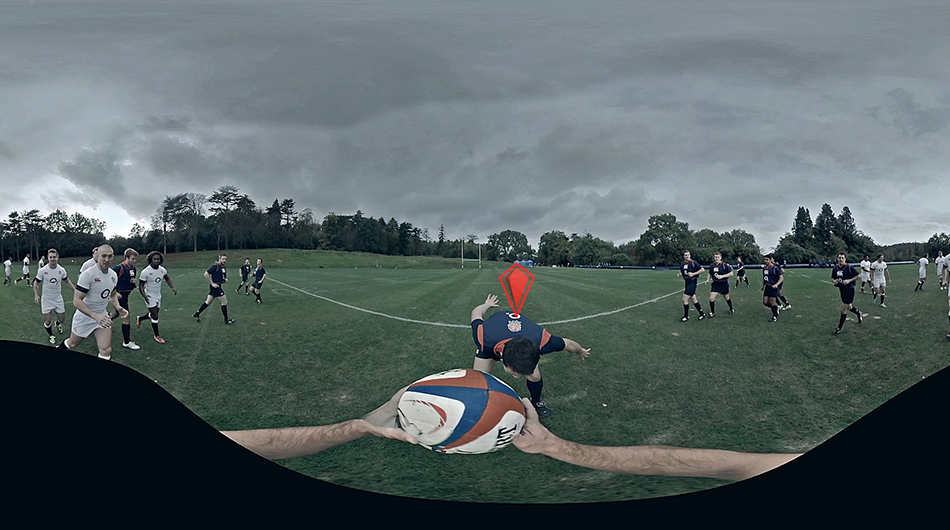 Directed by Gevorg Karensky and partnering with O2 and the England Six Nations rugby team, Wear the Rose places the user at the centre of the national rugby team’s training session, allowing them to turn their head in any direction, with the content responding and moving in unison. Throughout the simulation, digital snippets include graphs and graphics showing players stats and distances the ball covers in conventional game play scenarios such as drop balls and passes, as well a players stats. Bringing to life the virtual game, behind the scenes we used nine GoPro Hero three cameras on a custom built gimble to exploit the full capabilities of the Oculus device. After developing the technology to capture the video, it took a further 160 hours of filming and 320 hours of development to recreate the heart pounding action of a full training session. Michelle Craig, Co-Founder of UNIT9 Films and Executive Producer on Wear the Rose always knew that the team would have to go above and beyond the all techniques available on the open market to build a virtual reality sporting experience.

“Custom designing a camera rig and stablisation (stedicam) operators rig allowed us to cover every angle of the rugby pitch. The next challenge we faced was how to post this all together in virtual world without making people want to throw up. “To add to this we were shooting blind as we didn’t have the ability of playback live on set.

“To counteract this problem we developed an on set - never before seen - post workflow which allowed us to check 50% of the footage for holes.”

With such technological barriers overcome, mother nature seemed destined to step in and spoil the party.

“We had 4 hours with the Team and the country was set for one of its biggest storms. Our gimble rig, developed with flight and drone technology, wouldn't balance and things were looking tough.

“Our crew took the field and set to work. With three hours until the players arrived - we had to get it right!” The final experience transports players into a world of impact and tactical prowess where they find themselves at the heart of the rugby training pitch. Shadowed and cast alongside the nations’ rugby elite, Wear the Rose pushes the users senses to the limit, creating a feeling of action packed content and realistic scenarios.

Wear the Rose places the user at the centre of the national rugby team’s training session, commanded by coach Mike Catt. The virtual reality technology gives users the freedom to turn their heads in any direction, tricking the brain into believing that the experience is real.

The simulation is overlayed with animated graphics that display player stats, the distance the ball has traveled and other quantitative in-game trivia.

The virtual reality experience makes use of the Oculus Rift, a headset that uses custom tracking technology to provide ultra-low latency 360° head tracking, giving users the ability to look around the virtual world in a realistic way.

We also used nine GoPro Hero 3 cameras on a custom built gimble to exploit the full capabilities of the Oculus Rift.

After developing the technology to capture the video, it took an additional 160 hours of filming and 320 hours of development to recreate the heart-pounding action of a full training session.

This allowed us to cover every angle of the rugby pitch, though the next challenge we faced was to post this all together in virtual world without making people want to throw up. And to make things worse, we were shooting this blind with no playback on set. To counteract this problem we developed an on-set — never before seen — post-workflow which allowed us to check 50% of the footage for holes.

Wear the Rose transports players into an impressive virtual reality. As a 360° live-action experience, it’s virtually impossible to not have fun.