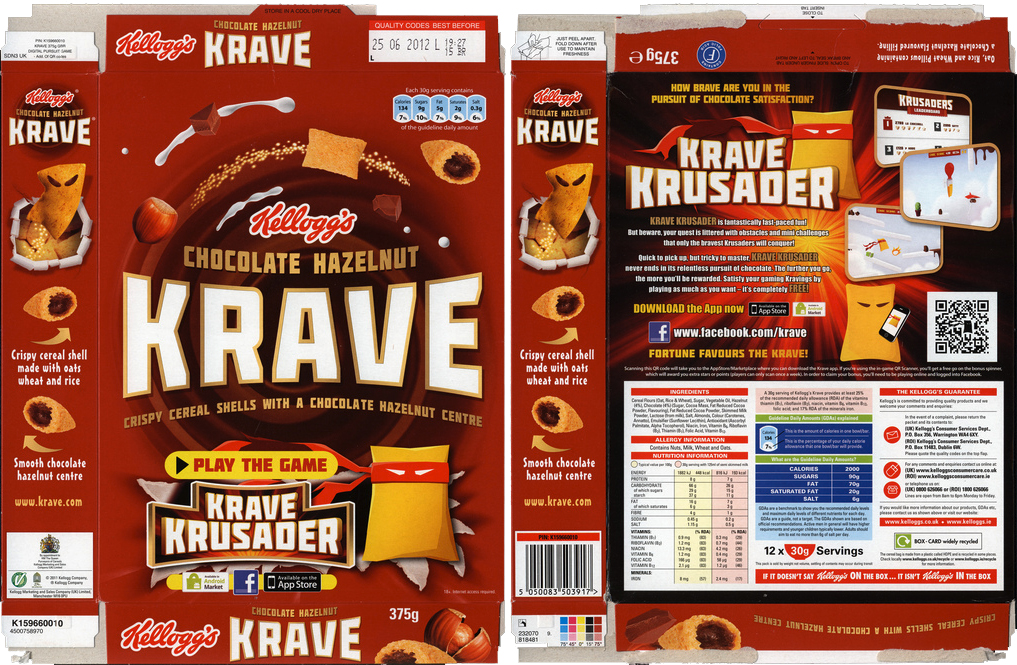 Krave Krusader is an online promotional game played as an App on Facebook and on Mobile creating a 360 campaign.

Kellogg’s is known as the world’s leading producer of cereal and convenience food. One of Kellogg’s new brand cereals is Krave. Kellogg’s Krave wanted us to develop a Facebook game to extend its popularity among the Facebook community and get them more engaged with their favourite brand. The game presents a new ‘face’ of the brand and an exciting game play to show Krave’s unstoppable hunt for chocolate.

Our purpose throughout this work has been to develop a game which is not only a chocolate hunt, but also an exciting and visually inviting experience, incorporating many different levels which can be shared and played with friends, and can continually evolve and develop.

Creating a 2D side-scrolling platform game which uses clever physics-based animations. It is fast-paced and challenging, giving the player mini missions and chocolate-collecting-targets. We incorporate role-playing to give each player their very own customisable character. The diversity of the game allows some of the more dedicated players to stick around for a long time, getting more and more involved in the depth of play available to them.

The Krave game lives on Facebook. The schematic above shows how rich media experience integrates with Facebook.

Facebook provides an iFrame structure to integrate a rich media experience within an app. Concretely the production is similar to an external microsite with a smaller canvas embedded within Facebook.

To give the client an idea of the direction, we started from the drawing board and materialised what was in our heads on to paper. The illustrations had to be created to communicate not just the character’s role in the game environment, but most importantly the behaviour and characteristics.

We worked in two stages. The first prototype set down some key rules about the game and the environment. The second stage of prototyping aimed at refining and tweaking the main parameters we had established up to that point. To do this we created a version of the game which will allow the agency team and us to change parameters together; the speed and height of jumps.

Through our shared testing we’ll arrive quite quickly and efficiently to a final decision on what the settings for the game ought to be.

UNIT9 has a rich history of creating character-based interactive experiences. Interaction is our main expertise, but very often in combination with character-driven animation.

From a production point of view, we have a small and strong group of people who are storyboard artists, illustrators and animators as well as motion graphic and visual effects specialists.

Our teams are fully integrated, meaning that our animations sit next to our coders and work closely with the people who do sound. It’s an open plan production approach which means everyone is involved on the same level and works in an integrated team environment.

After having created the character and game levels, we arrived at a very important part. How to make the game experience durable and maintain elements of surprise and excitement during gameplay? The answer was features and large variations of game elements:

During Gameplay the player can pickup exciting add-ons and power ups, which bring diversity and surprise to the game, a very necessary element of a game that can be play over and over again.

Customise Krave with 8 special outfits and unlock amazing super powers. Each outfit has 3 parts, each part can be unlocked by purchasing it with a specific amount of Stars.

An outfit requires all three parts to unlock its special power:

As an example, the Magician is able to freeze the Chocs for easy consumption:

We created a section on the Facebook App Game with Mini Challenges, each requires new sets of controls and adds to the lasting experience of Krave Krusader.

All mini-games will run on a set amount of time, that will vary according to the mini-game and the time in the game that it has been encountered (the later, the harder, the less the time to complete it).

Controls are Left and right arrow keys to move. Spacebar to jump.

Move as far as possible across the level to eat as much chocolate as you can without being spotted by the lights. If you are spotted, your visibility bar increases and when it it full the game is over.

There will be 3 different levels for this game. The difference will lie in the placement of obstacles, chocolates and lights. According to the difficulty of the mini-game (how late it is encountered) the time allowed to complete it will vary (less time for harder difficulties).

Controls are Left and right arrow keys to move. Spacebar to jump.

Krave has to jump up the platforms to eat as much chocolate as he can in a set amount of time. If he touches the flaming marshmallow, the mini-game ends.

There will be 3 different levels for this mini-game. The difference will lie in the placement of the ramps and the chocolate on them. According to the difficulty of the mini-game (how late it is encountered) the time allowed to complete it will vary (less time for harder difficulties).

Controls are to keep Spacebar pressed to fly up

Krave is constantly moving to the right at a constant speed. Pressing “space” makes the balloon inflate and Krave go higher. Release it makes Krave fall slowly. Krave has to navigate the level and without crashing eat as much chocolate as he can in the given amount of time.

Levels for this game will be randomly generated every time. According to the difficulty of the mini-game (how late it is encountered) the time allowed to complete it will vary (less time for harder difficulties).

Controls are to aim mouse and left click to shoot your grapling hook (can also work with pressing the spacebar) Releasing button will make Krave fly thru the air.

By the awesome force of a pendulum swing Krave will move forward, it’s about letting go at the right time and creating enough motion to move forward. At the same time Krave will catch solid chocolates trying to escape the boiling chocolate under him.

Levels for this game will be randomly generated every time. According to the difficulty of the mini-game (how late it is encountered) the grabbing points for your grappling hook will be smaller and smaller.

Badges are awarded after a player has completed a game session, they reflect the player’s performance during the game and highlight specific playing characteristics.

We have kept the controls for the main Krave Krusader game very simple, as shown on the screen grab from the in-game instruction screen below. For more skill full controls, the Player has the opportunity to play different games in the Mini Games section of the App.

Sound effects will vary, depending on what costume the player has selected for their Krave character and whether the player has collected enough Outfit Stars to elevate their character to the Bonus Power.

The Krusade: Run through the level catching as many choc chunks (and collecting points) as possible, while avoiding or dashing through obstacles and jumping over the gaps. As you progress, there are lots of power-ups that will help you get even further by giving you short, extra special boost as you play.

Chocolate Hunt: Users that play in certain locations or attend special events can also unlock bonuses to add to their score! Open up the Pursuit Map to locate all the Choc Chunks in your area. Once you know where they are gobble them up for bonus points that will be added to your weekly score and your chance to enter the prize draw.

Find special boxes of Krave and inside you’ll see we’ve hidden some very special bonus codes. Log in to Krave Krusader, click the ‘Unlock’ tab and enter the code and you could pick up bonus points or outfit stars. Bonuses will be displayed in the Leaderboards with the scores and will expire each week.